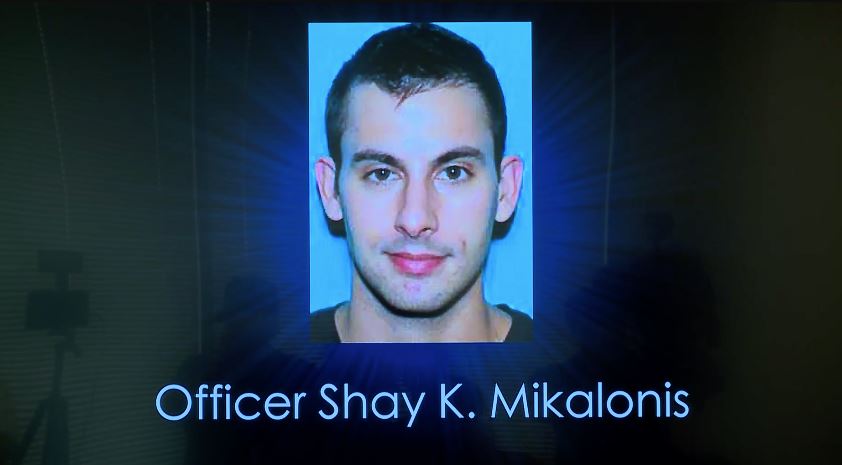 Shay Mikalonis was a Las Vegas police officer who identified himself as the officer seriously injured in an overnight shooting and detailed events that led to the second deadly shooting near downtown Las Vegas. Both events took place on Las Vegas Boulevard on Monday night, just a few miles away. Sheriff’s Deputy Chris Jones identified 29-year-old Officer Shay Mikalonis as the victim in a shooting near Circus Circus. Mikalonis, employed with LVMPD for four years, remains on life support and is currently in “serious condition,” police said.

Las Vegas police tweeted Tuesday afternoon that homicide detectives responded to the scene and located surveillance on the suspect, later identified as 20-year-old Edgar Samaniego, shooting a gun at officers as he walked down the street. According to LVMPD, detectives tracked Samaniego to a motel across the street since the shooting. SWAT officers responded to the scene and took Samaniego into custody. Police said he was transported to the Clark County Detention Center and charged with an attempted murder of a police officer and two counts of unlawful discharge of a firearm.

Let’s keep Officer Shay Mikalonis in our prayers. His condition remains unchanged after being shot last night. He is still in “grave” condition on life support. 🙏🏾 pic.twitter.com/3ErtqITrlU

Edgar Samaniego is charged with shooting a Las Vegas Metro Police officer in the head in a George Floyd protest on the Las Vegas Strip on June 1. Samaniego, 20, faces one count of attempted murder and two counts of unloading a weapon where a person could be in danger, according to records. Police say the seriously injured officer, who is currently on life support, was shot in the back of the head by Samaniego in front of the Circus Circus Casino. According to the Review Journal, the officer was identified as Shay Mikalonis, 29, who has been an officer since 2016 and is “assigned to the department’s Convention Center area command.”

Another shooting occurred around the same time, at 11:30 p.m., and in the same vicinity, in front of the Federal Courthouse on Las Vegas Boulevard South.

In the second overnight shooting event, police identified the armed man killed in a shooting in downtown Las Vegas. Police said Nevada resident Jorge Gomez had three weapons during the incident. He was initially struck by nonlethal bullets prior to “engaging” officers by raising his firearm. At that time, police opened fired. Gomez was transported to UMC Hospital where he later died.

Update from @lvmpd: Police say they believe this man acted alone. His name is George Jorge Gomez. Police say he was armed,pointed a gun at officers. They fired at him. He was shot&killed. This is separate from the shooting that critically injured a police officer pic.twitter.com/NnIdPAodfq