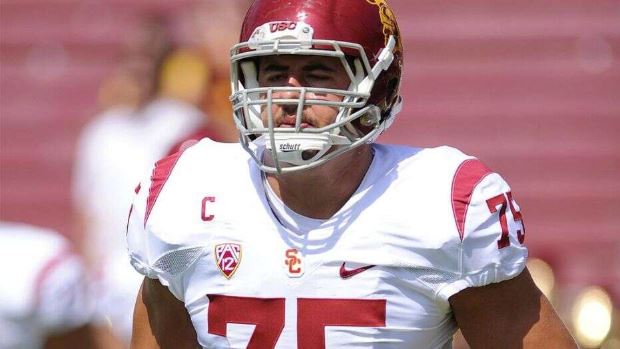 Former USC offensive lineman Max Tuerk died at the age of 26. USC’s Twitter account announced that Tuerk passed on Sunday, but the cause of death has not been revealed at this time.
Tuerk played with Trojans between 2012-15, and although he spent most of his career in the left guard and center, he made at least one start in every position along the line of attack. In her fancy career, Tuerk was a first-class American choice in 2012 and the first team All-Pac-12 in 2014.
Despite being an obstacle in the trenches and the leader of the program, Tuerk played in the USC during the turmoil. In his four years in Los Angeles, he was coached by Lane Kiffin, Ed Orgeron, Steve Sarkisian and current coach Clay Helton.

After Tuerk’s passing, several current and former Trojan coaches and players switched to social media throughout their condolences.
Following his career with the USC, covering 38 start-ups, he was selected by the San Diego Chargers in the 2016 NFL Draft. However, his professional career would be short as he spent only two years in the league with Chargers and Arizona Cardinals. In 2012, he was a four-star candidate from Santa Margarita Catholic High School and was among the best managers of this recruitment cycle.
Max Tuerk was an American football center. He played college football at USC. In 2014, in Pac-12, the first team was the entire conference choice.

Max Tuerk, an All-America offensive lineman at Southern California who was drafted by the Chargers, has died.​ https://t.co/nPZDPDbVgX

Details on Ex-USC and NFL OL Max Tuerk Passing Away at The Age of 26; Tributes Come in From College and NFL (Tweets) https://t.co/P3FVPTtAJx pic.twitter.com/uOHIKlSuHw

Tuerk, who lives in Trabuco Canyon, California, went to Santa Margarita Catholic High School, where he was a two-way lineman. His team won the CIF Pac-5 championship (ie the Southern California championship) and the CIF Division I state championship in 2011. Recognized as a four-star staff by Rivals.com, Tuerk is listed as the # 7 prospect of aggressive fighting in his class. His father, Greg Tuerk, played a tight game for Brown University.

In his real first class at USC, Tuerk emerged as the beginning of the left-wing struggle in the last five regular season matches of USC after serving as a frequently used comeback early in the season. When he first started in Arizona, the first USC to start in the left struggle became a true freshman (and the first to start fighting since Winston Justice in the last 12 games of 2002). Tuerk was named Freshman All-American by College Football News. He played the first 3 seasons in each match and was selected to many star teams. Tuerk played all three internal linesman positions, but was primarily a center. He was considered one of the best centers of college football at the beginning of his last class, but his season was cut shortly after five games where the anterior cruciate ligament was torn.

Death and cause of death

On June 20, 2020, Tuerk died while walking with his family in the Cleveland National Forest.