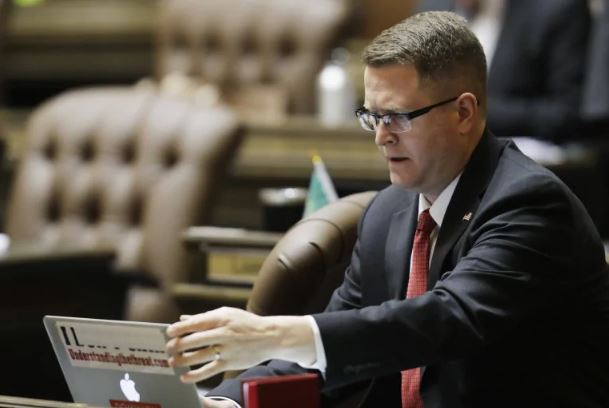 Big update: WA State Rep. Matt Shea “planned and participated in domestic terrorism against the US”, an investigation has concluded.

Republican Representative for the state of Washington Matt Shea says that U.S. government should be replaced with a theocracy, and that men who oppose this idea should be killed. via /r/atheism https://t.co/anuxsQx3Bl #atheist #humanist

In October 2018, Shea acknowledged that he had distributed a four-page manifesto which called for the killing of non-Christian males if a war were to occur and they do not agree to follow fundamentalist biblical law. Shea was referred to the Federal Bureau of Investigation for investigation as a result. In April 2019, Shea was removed as State House Republican Caucus Chair for advocating violence against religious minorities and offering state surveillance of political enemies to members of hate groups. An investigative report commissioned by the House found that Shea “participated in an act of domestic terrorism against the United States”, having organized and supported “three armed conflicts of political violence.” He was subsequently ejected from the House Republican Caucus.

In 1996, Shea entered the U.S. Army as a second Lieutenant, spending ten years in the service; he was deployed to Bosnia-Herzegovina, Iraq, and Kuwait. Shea left the Army in 2006 as a Captain.

Shea was a co-founder and director of the Washington Family Foundation, a socially conservative advocacy group. He was also a board member of the anti-same-sex marriage group Protect Marriage Washington, and during his first time in office introduced legislation seeking to block the recognition of same-sex marriage in Washington.

Matt Shea was divorced from his first wife in January 2008. His first wife Lisa was granted a protective order by a court after filing court documents complaining that Shea treated her “as a possession,” and was physically and emotionally abusive. Lisa’s brother-in-law testified in court documents that he saw Matt grabbing Lisa “very hard and violently” and pushed her into a vehicle. She attested that Matt “insisted she walk on his left side because his sword, if he had one, would be on his right side,” forbade her from writing a church bulletin, and protested that he would not seek profitable employment despite being a lawyer. Shea denied any physical abuse, called his ex-wife a “product of the foster care system”, and said it this was her third divorce. Matt Shea subsequently remarried.

In November 2011, Shea allegedly “pulled a gun during a confrontation with another motorist” in what police reports described as an incident of road rage. Shea was initially charged with possessing a loaded handgun in a vehicle without a concealed weapons permit; the charge was ultimately resolved under a “stipulated order of continuance,” in which “Shea paid a $75 fee and agreed that the information in the police report is correct” and the charge was dismissed after the passage of one year with no criminal violations.