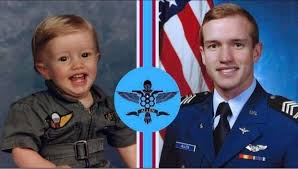 The US army chose the Air Force fighter jet pilot who was killed in a training crash on the British coast on Monday. The US Air Force 48th Figher Wing said on Tuesday that the armed and tactical chief deputy Lieutenant General Kenneth Allen of the 493 Fighter Fleet was killed after the F-15C Eagle fell into the North Sea for uncertain reasons.
Lt Allen, known as Kage, was the weapon and tactical chief assistant of the 493. Hunter Squadron. Since February, Allan has been working with the 48th Fighter Wing at the Royal Air Force Base Lakenheath in East England.

The U.S. Air Force said it has been placed at the base since February and survived by his wife and parents.
Jet Crash Incident
F-15C Eagle from the 48th Fighter Aircraft in RAF Lakenheath in Suffolk fell shortly after 09:30 to BST training. The wreck of the plane, thought to have dropped 74 nautical miles from the East Yorkshire coast, was previously found.

The cause of the crash is currently unknown.

Col Will Marshall of the 48th Hunter Wing in RAF Lakenheath said: “48. The pilot of the F-15C Eagle, descending from the Hunter Wing, was found and confirmed that he was dead.
The F15C, a single-person air defense fighter, is a jet model used by the U.S. Air Force since 1979. RAF Lakenheath is home to the largest US Air Force base in the UK and the only F-15 war wing in Europe.

According to British reports, Allen’s wife Hannah, who said “Kage”, published a tribute on his Facebook page on Tuesday. “There is no word to express how shaken I am,” he said.
“He was my absolute best friend, and the man Christ needs to hurry and come back so I can be with Kage again,” he said. “I feel blessed for loving him in this life, and I can’t wait to love him for eternity. You’re my eternal. “