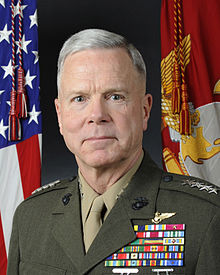 35th Commandant Of The Marine Corps

James F. Amos, better known by the Family name James F. “Jim” Amos, is a popular 35th Commandant of the Marine Corps. he was born on November 12, 1946, in Wendell, Idaho.Wendell is a beautiful and populous city located in Wendell, Idaho U.S. James F. “Jim” Amos entered the career as 35th Commandant of the Marine Corps In his early life after completing his formal education

The son of a career navy pilot, Amos was born on November 12, 1946, in Wendell, Idaho. He graduated from the University of Idaho in 1970 with a Bachelor of Science degree in finance and economics, and was commissioned as an ensign in the United States Navy through Naval Reserve Officers Training Corps on January 23, 1970. He attended pilot training in Pensacola, Florida, and was designated a Naval Aviator on November 23, 1971. He was promoted to lieutenant junior grade in December 1971, and was subsequently granted an inter-service transfer to the United States Marine Corps in 1972.

According to Wikipedia, Google, Forbes, IMDb, and various reliable online sources, James F. “Jim” Amos’s estimated net worth is as follows. Below you can check his net worth, salary and much more from previous years.

James F.‘s estimated net worth, monthly and yearly salary, primary source of income, cars, lifestyle, and much more information have been updated below.

James F. who brought in $3 million and $5 million Networth James F. collected most of his earnings from his Yeezy sneakers While he had exaggerated over the years about the size of his business, the money he pulled in from his profession real–enough to rank as one of the biggest celebrity cashouts of all time. his Basic income source is mostly from being a successful 35th Commandant of the Marine Corps.

Since retiring from the Marine Corps, Amos has joined the board of directors of the Lord Corporation, a defense contractor. He currently serves as chairman of the board of the Semper Fi Fund.

In 2017, Amos was found guilty of Unlawful Command Influence by the U.S. Navy and Marine Corps Appeals Court in unanimous ruling of 3-0 regarding the prosecution of Marines involved in 2011 Taliban corpse desecration case.