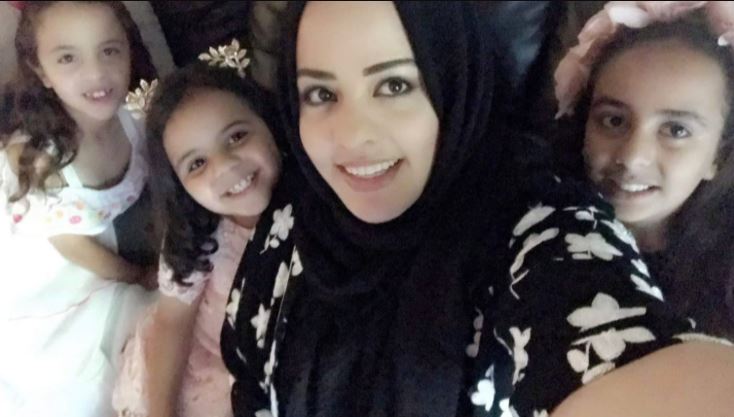 Gazella Bensreiti a mother of three girls, said in a Facebook post that she was at the arena Nov. 5, where her 8-year-old daughter was going to sing the national anthem with her school choir. On Nov. 5, Gazella Bensreiti went to Pepsi Center to watch one of her three daughters perform the National Anthem.

Gazella Bensreiti, an American Muslim mother of three, was waiting to enter the Pepsi Center to watch her daughter perform the National Anthem, when an employee at Will Call told her to “take that thing off” according @CAIRNational @oscarcontrarius https://t.co/S9q0eX33RG

The incident occurred on Nov. 5 before the Nuggets took on the Miami Heat, an attorney for the advocacy group told the Denver Post.

Gazella Bensreiti, an American Muslim mother of three, was waiting to enter the Pepsi Center to watch her daughter perform the National Anthem, when an employee at Will Call told her to “take that thing off” according @CAIRNational @oscarcontrarius https://t.co/S9q0eX33RG

On Nov. 5, Gazella Bensreiti, 36, arrived at the arena to watch her 9-year-old daughter sing the National Anthem with her school choir, ahead of the Denver Nuggets-Miami Heat basketball game. The single mother-of-three escorted her daughter to the box office and after the girl walked through a metal detector, Gazella Bensreiti began unloading her phone, car keys, and AirPods to follow suit.

“Wearing the hijab to me is part of my religion. It’s hard enough to wear your hijab and live your life as a Muslim woman,” Gazella Bensreiti said.

But a woman standing 10 feet away waved her arm in Gazella Bensreiti’s direction. “She said, ‘You can’t come in here with that thing on your head,’” Gazella Bensreiti tells Yahoo Lifestyle. “I said, ‘Excuse me?’”

The mom explained that her hijab was for religious purposes, but the woman allegedly said, “I don’t care. It doesn’t matter. You have to take it off.” Gazella Bensreiti says the woman stated it was a “policy” to remove the headwear, to which a co-worker agreed.

“I didn’t know what they were searching for, but I have nothing to hide, so I offered to remove my covering so they could search me in private,” Gazella Bensreiti tells Yahoo Lifestyle, adding that she had participated in a respectful search at an airport traveling from Dubai to Frankfort while wearing an abaya, a traditional head-to-toe garment. However, she says, the Pepsi Center employee wouldn’t allow it.

“I have no problem removing my hijab and showing them every strand of hair,” Gazella Bensreiti, who was born and raised in Colorado, tells Yahoo Lifestyle. 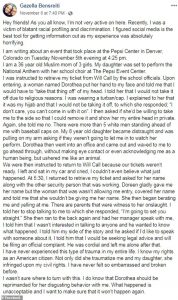 Hey friends! As you all know, I’m not very active on here. Recently, I was a victim of blatant racial profiling and discrimination. I figured social media is the best tool for getting information out as my experience was absolutely horrifying.

I am writing about an event that took place at the Pepsi Center in Denver, Colorado on Tuesday November 5th evening at 4:25 pm.
I am a 36-year-old Muslim mom of 3 girls. My daughter was set to perform the National Anthem with her school choir at The Pepsi Event Center.
I was instructed to retrieve my ticket from Will Call by the school officials. Upon entering, a woman named Dorothea put her hand to my face and told me that I would have to “take that thing off” of my head. I told her that I would not take it off due to religious reasons. I was wearing a turban/cap. I explained to her that it was my hijab and that I would not be taking it off, to which she responded; “I don’t care, you can’t come in with it on”. I then asked if she’d be willing to take me to the side so that I could remove it and show her my entire head in private. Again, she told me no. There were more than 5 white men standing ahead of me with baseball caps on. My 8 year old daughter became distraught and was pulling on my arm asking if they weren’t going to let me in to watch her perform. Dorothea then went into an office and came out and waved to me to go ahead through, without making eye contact or even acknowledging me as a human being, but ushered me like an animal.
We were then instructed to return to Will Call because our tickets weren’t ready. I left and sat in my car and cried, I couldn’t even believe what just happened. At 5:30, I returned to retrieve my ticket and asked for her name along with the other security person that was working. Doreen gladly gave me her name but the woman that was wasn’t allowing me entry, covered her name and told me that she wouldn’t be giving me her name. She then began berating me and yelling at me. There are parents that were witness to her onslaught. I told her to stop talking to me to which she responded, “I’m going to set you straight.” She then ran to the back again and had her manager speak with me, I told him that I wasn’t interested in talking to anyone and he wanted to know what happened. I told him my side of the story and he asked if I’d like to speak with someone about it, I told him that I would be seeking legal advice and will be filing an official complaint. He was cordial and left me alone after that.
I have never experienced this type of trauma in my entire life. I know my rights as an American citizen. Not only did she traumatize me and my daughter, she infringed upon my civil rights. I have never felt so embarrassed and broken before.
I wasn’t sure where to turn with this. I do know that Dorothea should be reprimanded for her disgusting behavior with me. What happened is unacceptable and I want to make sure that it won’t happen again.

“Pepsi Center prides itself on creating a safe and inclusive environment for all patrons regardless of race, gender, religion, national origin, disability, and sexual orientation.  Unfortunately, there was a misunderstanding on November 5 when a security agent didn’t recognize that Gazella Bensreiti was wearing a hijab. A supervisor quickly intervened, and Gazella Bensreiti entered.

“Take that thing off.” Gazella Bensreiti was asked to remove her hijab at the Denver Pepsi Center before attending a basketball game.

Now, she’s calling on the arena to change its policies and provide better trainings for employees. https://t.co/SbZhhH6aei

We have reached out to Gazella Bensreiti and look forward to engaging in honest discourse that leads to greater awareness and an opportunity to further celebrate the diversity that makes Denver such a special place. While the matter is still under review, we are taking steps to modify our screening process and provide additional education for our staff.”

Gazella Bensreiti Fast Facts You Must Need to Know