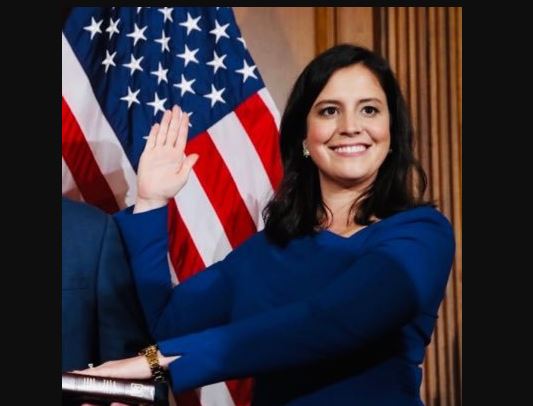 Elise Stefanik Full Name Elise Marie Elise Stefanik is an American politician serving as the U.S. Representative for New York’s 21st congressional district since 2015. Upon her first House election in 2014, Elise Stefanik, then aged 30, became the youngest woman ever elected to Congress at the time. She is a Republican.

WATCH: Rep. Elise Stefanik says she disagrees with President Trump’s tweet about Marie Yovanovitch during the former ambassador’s testimony, but argues that these hearings are “not about tweets.” #ImpeachmentPBS pic.twitter.com/kl4HkCtRfu

Elise Stefanik was born in Albany, New York in 1984 to Melanie and Ken Stefanik. Her parents own a plywood business in the Albany area.

Elise Stefanik earned her graduate degree from the Albany Academy for Girls, she entered Harvard University, graduating with a degree in Government in 2006. While at Harvard, she was awarded the Women’s Leadership Award.

After graduating from Harvard, she joined the administration of President George W. Bush, working as staff to the Domestic Policy Council. Elise Stefanik worked in the office of the White House Chief of Staff for Joshua Bolten (not to be confused with John Bolton), Bush’s second deputy chief of staff. She also helped prepare the GOP platform in 2012, served as director of new media for Tim Pawlenty’s presidential exploratory committee, and worked at the Foundation for Defense of Democracies and the Foreign Policy Initiative. Elise Stefanik managed Wisconsin congressman Paul Ryan’s debate preparation as he ran for Vice President of the United States in the 2012 general election.

Following the Romney-Ryan loss in the 2012 presidential election, she returned to upstate New York and joined her parents’ wholesale plywood business.

On March 26, 2019, Elise Stefanik was one of fourteen Republicans to vote with all House Democrats to override President Trump’s veto of a measure unwinding the latter’s declaration of a national emergency at the southern border.

Elise Stefanik voted to release the Nunes memo written by staff members of Republican U.S. Representative Devin Nunes. President Trump asserted that the memo discredited the investigation into Russian interference in the 2016 United States elections, but the FBI asserted that “material omissions of fact…fundamentally impact the memo’s accuracy.”

Elise Stefanik supported the ending of the House Intelligence Committee’s investigation into Russian interference in the 2016 United States elections over the objections of Committee Democrats.

On Tuesday, December 19, 2017, Elise Stefanik voted against the Tax Cuts and Jobs Act. In a December 18 Facebook post, Elise Stefanik asserted that “the final bill does not adequately protect the state and local tax deduction that so many in our district and across New York rely on … New York is one of the highest taxed states in the country, and families here rely on this important deduction to make ends meet.

After the FCC decided to repeal Obama-era net neutrality in December 2017, Elise Stefanik urged her congressional colleagues to pass legislation restoring the policy.

In September 2018, Elise Stefanik co-sponsored, together with Seth Moulton and Dan Donovan, the “Cyber Ready Workforce Act” advanced by Jacky Rosen. The legislation would create a grant program within the Department of Labor to “create, implement and expand registered apprenticeships” in cybersecurity. It aims to offer certifications and connect participants with businesses in order to “boost the number” workers for federal jobs in said trade.

In the 116th Congress, Elise Stefanik was one of eight Republicans to vote in favor of the Equality Act.

On September 25, 2019, Elise Stefanik announced that she did not support the impeachment of President Trump.  During the hearings, Matthew Dowd, former chief strategist for the Bush-Cheney 2004 presidential campaign and current ABC News political analyst, tweeted: “Elise Stefanik is a perfect example of why just electing someone because they are a woman or a millennial doesn’t necessarily get you the leaders we need.” Elise Stefanik called the tweet “disgusting, sexist and shameful.” After significant pressure, Dowd apologized and removed the tweet.

Elise Stefanik moved into the 21st Congressional District immediately prior to beginning her first campaign. Her official residence was in Willsboro, New York, where her parents had owned a vacation home for many years.

As of April 2014, she owned a minority interest in a townhouse near Capitol Hill in Washington, D.C., valued at $1.3 million.